The Prince And Ryanair: Another Example On Why It’s Hard To Get A Full Picture Of The Super Rich Via The Media 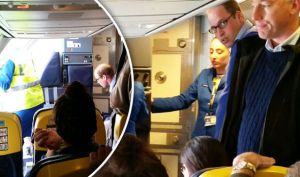 According to a recent email from Travel + Leisure Prince William flew Ryanair while traveling on business for his new employer, an air ambulance service. The brief goes on to note “insiders” say his wife Kate Middleton and Prince Harry fly budget airlines too! I am sure the report, taken from sister Time magazine is correct, since there are pictures. At the same time the source article notes Angelina Jolie and Brad Pitt were recently spotted flying coach on Air France, forgetting to mention that they had flown in from the U.S. in first class and there was no first or business class on the domestic connecting flight to Nice.  Tickets for the family on that trip likely ran well over $100,000.

A quick Google search would have found a June 23 Daily Mail article that members of the Royal Family spent nearly $8 million on travel in 2014 billed back to the state. Among the highlights was a $150,000 trip by Prince Harry to the World Cup, including about $60,000 on commercial airlines and another $60,000 for private jet charters, hardly Ryanair type fares. Prince William also rung up a $120,000 trip to Japan and China, including $30,000 for pre-trip planning trips. Prince Andrew visited Kuwait via private jet at an expense of $90,000, and in total there were over 60 trips that cost at least $15,000.

The point of this is not to say the spending was right or wrong. The aforementioned trips were as part of the Royal’s official role to generate tourism and investment in the UK, plus sales for homeland companies.

I think it’s fine that William flies Ryanair. I suppose his company won’t pay for a private jet, and he doesn’t want to pay the difference, or perhaps the Queen won’t allow it. In fact, it’s not unusual for private owners and user to mix in commercial airlines for long-haul flights or sometimes a quick hop, although Teterboro to Washington D.C. is one of the most heavily traveled private jet routes.

The point is that looking at the Super Rich through the lens of the media rarely provides an accurate picture, particularly if looked at in a singular way. Does William ever fly privately when hopping up to Scotland? The full ledger of trips shows there are plenty of domestic trips made by the Royal Family by private aviation.

That said, while flying a private jet doesn’t necessarily mean one is ready to shell out hundreds of thousands of dollars for a watch, it generally does mean they have the money. On the flip side, getting a glimpse of an UHNW on discount airline may not reflect their normal lifestyle.

While the piece by Travel + Leisure didn’t try to portray William’s Ryanair flight as anymore than a matter of fact, it just shows how it’s critical not to make assumptions from a single piece in the puzzle, particularly if you are in the business of selling and marketing luxury products to UHNWs.  After all, maybe William’s private jet had a mechanical problem?