Valuing Visitors To Your Destination: Say It With Flowers 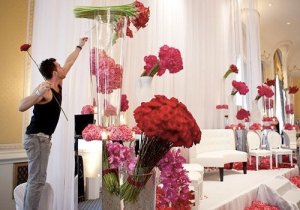 How much is a typical visitor worth to the places they visit?

According to the World Travel & Tourism Council, global tourism accounts for one out of every 10 jobs, meaning the stakes are high. Yet, all visitors are not created equal. Some spend a lot. Some spend very little. Some bring ancillary benefits such as repeat visits, word-of-mouth, publicity if they are well known, and investments if they are wealthy.

While the profile of travelers to the Caribbean is broad, the ongoing debate always includes the value of cruise ship passengers. For some destinations, port calls by vessels holding 5,000 or more passengers can account for as much as 80 percent of annual visitor arrivals. Destinations have to invest millions in port, navigation and land infrastructure to support ships that tower to the same height as 20 floor buildings and are five times the size of Titanic measured by gross tonnage. Cruise lines today make large parts of their profits from onboard spending in celebrity chef restaurants, myriads of bars and clubs, onboard shopping and gambling in casinos. They pressure local governments to keep their on-ship businesses open even while in port. As fuel prices have increased, having ships tied up to the dock, but keeping passengers onboard spending money on spa treatments, rock climbing walls and ice skating rinks adds to the bottom line.

How much of that actually stays ashore?

One industry observer noted the number is actually lower than my estimate. He gave the example of a shore-based operator who gets paid $10 per head for his excursions. The cruise line sells the excursion onboard its ships for $30 meaning only about a third of the money actually ends up in the local economy. An article in The Huffington Post noted as much as 40 percent of what is spent shopping onshore goes back to the ship through commissions and fees.  Still a visit by a large ship could bring over $100,000 to the local economy.

While the mass market, mass affluent and the cruise markets are of course worthy of the constant attention they get, I am finding more and more tourism officials are looking at the Ultra High Net Worth (UHNW) segment, which is essentially represented by private jets and superyachts.  After all, UHNW families have over $50 trillion in Net Worth by some estimates, about three times the amount of the U.S. deficit, or about the same as the combined GDP of the U.S., China, Japan, Germany, France, United Kingdom, Brazil, Russia, Italy, India, Canada, Australia and Spain.  In other words, spending is never a problem if they want something or want to do something.

Say It With Flowers was a 1934 British musical movie. And in the world of elite travelers flowers are just one way money gets pumped into the local economy.

The Hon. Richard L. Sealy, M.P. is Minister of Tourism and International Transport for the Government of Barbados. During an interview with Elite Traveler TV Sealy spoke about a megayacht that recently arrived. It was in port for several weeks with the crew spending money. As they made final preparations for the owner’s arrival, there was a visit to the local florist. Over $10,000 in was spent on arrangements, injected into the Bajan economy. If one wants to say the average cruise ship passenger is worth $100, this single store visit alone was equal to 100 cruise ship passengers.

Likewise, another Minister shared how the guests at a villa on her island spent $40,000 on floral arrangements alone. “People don’t realize how many people are impacted (by private jet and superyacht travelers),” Her Excellency Sarah Wescot-Williams, Prime Minister of St. Martin told me.

Roxanne Genier who worked on a yacht before starting her own luxury marketing firm recalled how the owner of the yacht she worked on took advantage of cloudy weather to go ashore with his girlfriend who returned with a $200,000 bracelet.

It’s difficult to get exact numbers on the value of superyachts, however, the U.S. Superyacht Association estimates the economic impact of a 55-meter yacht is $4.7 million per year. It’s not unusual to reward the crew for good service during a week’s charter by buying each a $1,000 watch. Tips of $1,000 to $3,000 per head for crews that can range into the low double digits mean money that often comes right back into the local economy. Should the yacht need fueling, topping off the tanks can easily run $100,000 and often much, much more.  Families of crew often rent apartments for the season so they can see their loved ones on the infrequent off days.

The Hon. Alexandra W. Otway-Noel, Tourism Minister for Grenada has seen all ends of the travel industry, having cut her teeth working in hotels, at tour operators and airlines before switching to politics. She relates how the owner of one superyacht sent his helicopter in to record a sports game he couldn’t receive from wherever his yacht happened to be. The crew spent whatever money was needed to get the recording (thousands of dollars) and the helicopter needed fuel (thousands more).

Hotels perhaps unexpectedly benefit from the superyachts. Yacht users will often take rooms or suites in hotels as a land base, particularly if they are anchored, thus avoiding the hassle of having to tender back and forth. Crew get the rooms set up bringing in change of clothes and anything their passengers will need during the land portion of their visit which may end up part beach, part shopping, part exploring, part dining and then late night clubbing.

One General Manager told me about a yacht owner who after dropping several thousand dollars on expensive wines at dinner sent his crew the next day to buy some favorites. The bill was over $100,000.

An aspect of UHNWs I have long believed luxury marketers miss out on is the fact that the Super Rich can no longer be pegged to a singular nationality. I always say, “If you want to find wealthy Russians, go to London, the French Riviera or Miami.” Usually whomever I am talking to finishes my sentence by adding Dubai, Phuket and more and more the Caribbean. Susan Hancock, Owner of St. Thomas Jet Center in the U.S. Virgin Islands says she regularly sees private jet arrivals from Russia, the Middle East, Central Europe and Africa in addition to the U.S. and Western Europe. The Emir of Qatar has been reporting arriving by private jet in Turks & Caicos, Puerto Rico and Barbados, while Bill Gates has been spotted in Grenada walking around in shorts and a tee-shirt. What this means is to effectively attract the UHNW tourism promoters need to look for global media solutions.

One popular misconception is the Super Rich only survive on champagne and crystal. According to Forbes, last year UHNWs spent over $4 billion on adventure travel, something the Caribbean has plenty of, be it hiking, climbing, marathons, exploring volcanoes and waterfalls, triathlons, kayaking, diving, kite-surfing, scuba, horseback riding or ripping it on all-terrain vehicles and zip lines. As one minister told me, “Rich people like to have fun too!”

Two more opportunities for destinations, including the Caribbean, are promoting annual events and festivals, and hosting private events. Carnivals, music and culinary events, and sporting events are all reasons to spur an UHNW visit. On Hawaii’s Big Island, the annual Iron Man typically draws as many as 20 participants who arrive by private jet. They often come with families and support teams. Using the Prince research showing a private jet brings $69,000 in spending, excluding fuel and landing fees, the benefit of the private jet flying athletes to the local impact is probably around $1.5 million. This is roughly the same as 1,500 “regular” tourists based on Hawaii Tourism Authority’s research that pegs average visitor spend at $200 per day and length at five days.

In terms of private events, castles and forts, beaches, rum factories, former plantations, private cays and islands all offer superb venues for elite traveler style events. Sir Phillip Green famously dropped over $10 million on a father/daughter birthday party in Mexico’s Riviera Maya. These events can range from giving a jolt to a variety of local businesses (hiring bands, performers, security, catering, florists, decorators, transportation vehicles, plus workers need to construct venues, set-up, clean-up, etc.) to publicity from bringing in big name performers as part of the event. On a visit to Ireland, one UHNW commissioned a private performance for his young daughter by the cast of River Dance on his boat, where local contractors had to install special flooring.

Often times, UHNW groups can be too large for peak season when hotels run near 100 percent occupancy, meaning that Super Rich group/event business can be attracted to fill shoulder and low periods. For destinations that value meeting and incentive business, it’s worth remembering that the person who has to sign off on the venue is probably sitting on a private jet or yacht. What’s more, four-star hotels with good group facilities and nice suites often benefit from this area of spending further broadening the impact beyond yachts, villas and five-star resorts for accommodations.  Additionally, smaller properties can also be ideal for full takeovers.

The last point in attracting UHNW visitors is potential long-term benefits. For example, in Grenada, one tourism investor is from Egypt, a place that probably wouldn’t be a top-of-mind source for project funding. There are also numerous stories of UHNWs visiting a place and seeing a business opportunity. Swedish pharmaceutical billionaire Frederik Paulsen, Jr. after visiting Georgia to view fossilized mammoth tusks got the idea to do a vodka in a tusk shaped bottle. The plant he opened there now produces 180,000 bottles of the super premium spirit per year. A visit to the remote South Atlantic Falkland Islands reminded him of his father’s ancestral home on the island of Fohr in the North Sea. He was so touched he ended up spending $10 million to help island residents on a rat eradication project.

So while the Super Rich may like to “say it with flowers,” to me the clear message is their preferred language is dollars. The message seems to be getting through. New jet centers just opened in The British Virgin Islands and St. Kitts and two new FBOs are due to open in Turks & Caicos by yearend.  In an area where getting there can be a problem (there is a constant battle with commercial airlines for enough air seats at reasonable prices) and getting around the region can be difficult (American Airlines several years ago closed its hub in San Juan), private jets and yachts offer an opportunity for multiple destinations to reap benefits.  It’s going to be interesting to see which governments are the most proactive in courting the UHNW market.

1 Response to Valuing Visitors To Your Destination: Say It With Flowers