For The Titans Of Finance, Christmas Comes In The Spring 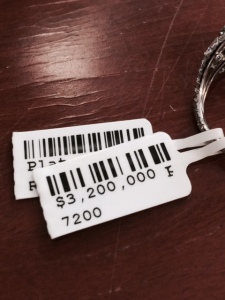 Black Friday.  Cyber Monday.  When most people think of the prime gift giving season, the Thanksgiving to Christmas dash with shopping carts stuffed full of video games, big screen televisions and coffee makers may come to mind.  And of course, that same period is a peak for luxury purchases as well.

In the world of the Super Rich, a second wave of interest generates in January as the big financial market players start announcing bonuses. However, some of the biggest sales are actually made in March, April and May.

“That’s because when you are buying multi-million jewelry you typically wait until the money is in your bank account,” said one jeweler who caters to the financial elite in the New York City area.

Joe Padulo, who founded “The One and Only One” marketing group that promotes seven figure colored diamonds noted last year one of his members sold a $4.5 million ring in April after a well rewarded hedge fund boss had his windfall safely in his bank account.

“It’s a big purchase, and they want to make sure they actually have the (bonus) money before they buy,” said the New York area jeweler, who asked not to be named.

If the transactions take place in the Spring, how far in advance do the Super Rich actually decide on what they are going to buy?

In the 2007 book “The Sky’s the Limit: Marketing to the New Jet Set” based on over 600 interviews with private jet owners we identified three buying personalities for Ultra High Net Worth consumers. Winners, who represent 25 percent of fine jewelry purchasers, typically have specifics in mind months in advance having thought about ‘what they would buy’ when they achieved some desired success.

However, the jeweler I spoke with noted that many of his customers buying six and seven figure jewelry are more spur of the moment. The scenario, he said, is “(The customer) bought the newest Maserati, and all of sudden it occurs to him, ‘I better buy something for my wife.’”

Interestingly while the transactions for a ring or bracelet often cost more than the value of most people’s houses, the jeweler told me “90 percent of  (buyers)” aren’t fluent in the diamond industry’s complex lingo of cuts and grading, meaning trust is critical. “It’s not unusual for them to come back and tell me they checked to make sure they had gotten a fair price,” he said.

The price tag in the photo at the top of the page?  It’s from one of the rings that Padulo and his members were looking at this morning to include in an ad campaign that will run during the March/April period hoping to catch the attention of a Super Rich buyer.